You are here: Home » Our Instructors

More than any other aspect, what sets Alpine Flight Training apart from other local flight schools is our instructors.  At Alpine Flight Training you will receive instruction from experienced professionals that have extensive aviation knowledge and are adept at teaching the art and science of flight.  Unlike many flight schools where the instructor is just building time for their next career, our instructors are seasoned professionals who have already made it to the top and now are coming back to instructing for the enjoyment of teaching. Our instructors practice what they teach, using their skills and strategies to fly to places like Alaska, Montana, Idaho. You can learn more about our instructors below.

Loren has worked in a variety of different aviation businesses of the last 25 years.  Prior to living in Gypsum and operating Alpine Flight Training he worked for Eclipse Aviation in Albuquerque New Mexico developing both the Eclipse 500 aircraft and the Eclipse 500 training program. Loren is type rated in the AirBus 320 Series, and the Boeing 737. Loren currently divides his time between instructing and flying the Boeing 737.

Loren holds an Airline Transport Pilot (ATP) in single engine land aircraft, a commercial license in multi-engine land aircraft, single engine seaplanes, and gliders.  With over 9000 hours of instruction given, Loren holds instructional ratings for single engine and multi-engine airplanes, and instrument airplanes as well as ground instructor certificates for advanced and instrument ground instruction as well as seaplanes. Loren is a Gold Seal CFI and NAFI Master CFI.  Loren originally learned to fly at Eagle County Regional Airport in 1995, and the bulk of his 12000 hours of time has been flying and teaching in the Colorado Rockies.  In addition to instructing for Alpine Flight Training, Loren is a member of the FAAST Team (FAA Aviation Safety Team).

A former regional airline jet captain with over 4500 hours, John holds an ATP (Airline Transport Pilot) rating for multi-engine land aircraft, with type ratings for Canadair Regional Jet (CL-65) and the Dornier 328 regional turbo-prop (DO-328).  John also holds a Commercial license for single engine land aircraft.  John has nearly 530 hours of dual instruction given, and instructional ratings for single and multi-engine airplanes as well as instrument airplanes.  Today, John operates his own business in the Vail Valley, however his aviation history and experience make him an excellent instructor and a true aviation professional. 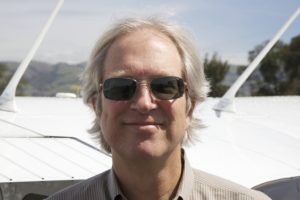 Ken is one of our part time instructors.  He is a retired electrical engineer from the semiconductor industry in Silicon Valley where he designed chips for 35 years.  He got his private pilot’s license at 17 years old and has owned several different aircraft for the last 30 years.  His current aircraft is a pressurized Cessna 210. After retiring from high tech, Ken became an instructor at a busy Part 141 school and was their Chief Flight Instructor for many years.  He has over 7000 hours of flight time.   Ken is a regular contributor to IFR Refresher magazine.  His specialty is teaching the instrument rating.

We love getting feedback from our clients.  Checkout the following places and leave us a review, or read others reviews of Alpine Flight Training!